​In this dissertation, I examine the importance of transport accessibility and human capital for regional development in terms of firms and employment. The principal question that I ask in the thesis is how improved access (to transportation services, human capital, jobs, and the market) contributes to the spatial variation in economic development, with special attention paid to the development of the wholesale sector. The thesis consists of four independent papers in which I utilize empirical data and estimations to establish relationships between economic variables. Central to all chapters are different quantifiable measures of the transportation system: either in the form of an accessibility measure or a proximity measure.

Paper 1:
​“The Fate of the Middleman in the Information Age: The Role of Human Capital in the Growth of Wholesale Services in Sweden”
Presentation at WRSA 2018 (PowerPoint)
Status: "Under review in Spatial Economic Analysis"
Research funded by: The Swedish Retail and Wholesale Council 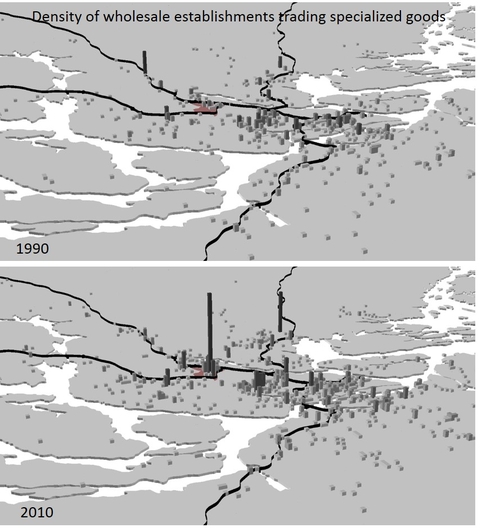 How did I do it?
I superimposed a 5 by 5km grid on Sweden, recorded all wholesale establishments in the grid cells in 1990 and 2010 in four different subsectors (wholesalers trading producer goods, food, furniture/clothing and high-tech goods). Separate OLS regressions were estimated with the growth rates of the four wholesale subindustries in each cell as dependent variables, relevant control variables and human capital (the share of university educated) in the cell an surrounding cells (spatially lagged) as explanatory variables. I hypothesized that human capital is a main driver for the success of wholesale subindustries and the wholesale firms that have located in proximity to a highly educated labor force are the ones that have survived and thrived in the Internet Age.
Main methodological problems dealt with (very technical info):
Endogeneity in the form of confounding of third factors influencing both wholesale growth and growth of human capital and in the form of reverse causality between these two variables. This is dealt with by the use of instrumental variables and controls.
Main finding
-Wholesalers trading producer goods have been the biggest losers that have disappeared between 1990 and 2010 in Sweden, whereas wholesalers trading high-tech specialized goods have almost doubled in number of firms and employees.
-Locations where human capital is high had significantly higher growth rates of all wholesale subindustries, except for the producer good subindustry. Human capital has been crucial for the success of wholesales.
See instrumental variable (IV) regression results in the figures below (point estimates with 95% confidence intervals shown). 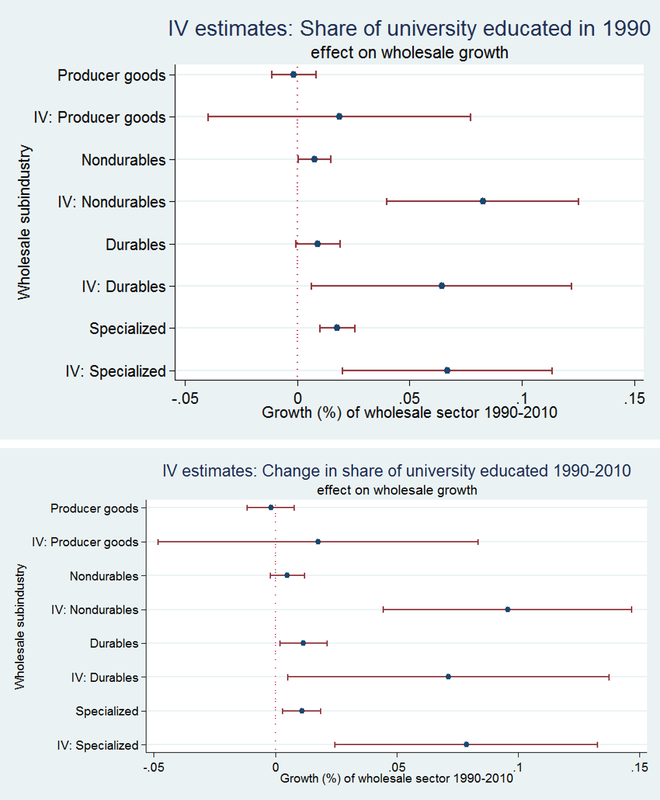 Paper 2:
​“Transport Infrastructure and Wholesale Start-ups in peripheral and central locations in Sweden”
Status: "Under review in Review of Regional Studies"
Research funded by: The Swedish Retail and Wholesale Council
​What is it about in one sentence?
Regions lacking in local demand can compete for start-ups in wholesale trade through promoting their transport infrastructure.
Who cares and why?
Municipality-/cities planners should care because they consistently use slogans like “a logistically convenient location” and “a great provision of transportation services” as selling points in order to get businesses to invest in their municipalities. But theory predicts that increasing transport accessibility between a location with lower economic activity in the periphery and the urban center could have either of two contradicting outcomes: (i) Firms are attracted to the peripheral location because it now has better accessibility to the urban center. (ii) Firms are deterred from investing in the peripheral location because better accessibility implies that any firms there now face increased competition from the urban core.
I argue that wholesale start-ups, in particular, generally won’t locate in urban centers because starting a business is expensive and rents are higher in the urban core, especially for wholesale firms that often require large facilities as they keep stocks (see figure below). So wholesale start-ups would prefer the periphery, but which peripheral municipalities? I argue that wholesalers will be attracted to the peripheral municipalities that offer better transport services. Attracting wholesale businesses is important for the economic development of peripheral areas since wholesalers transfer information over large distances while trading their goods. 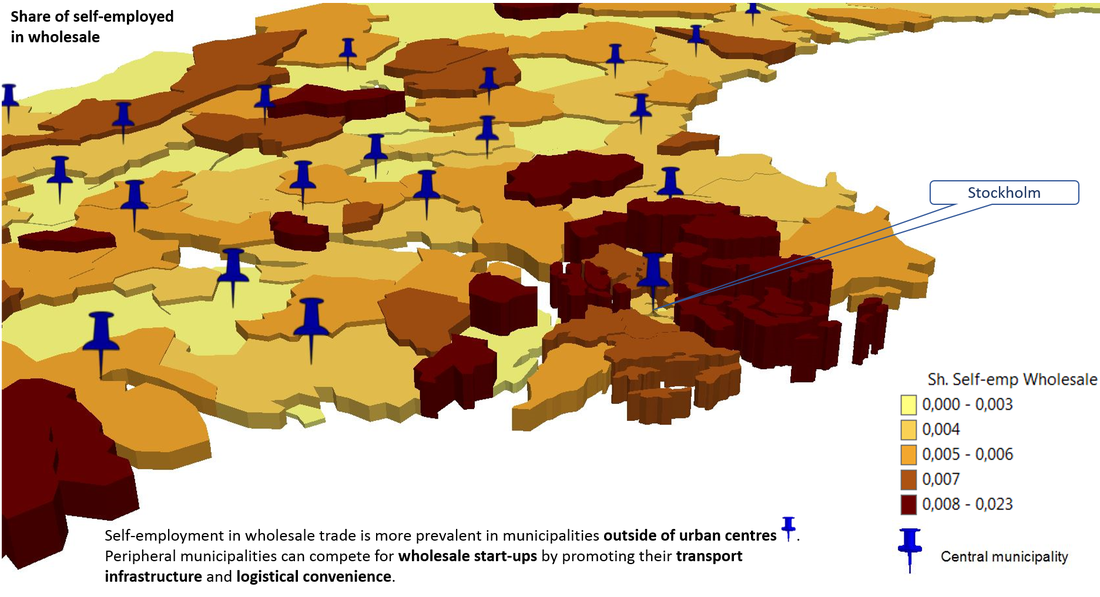 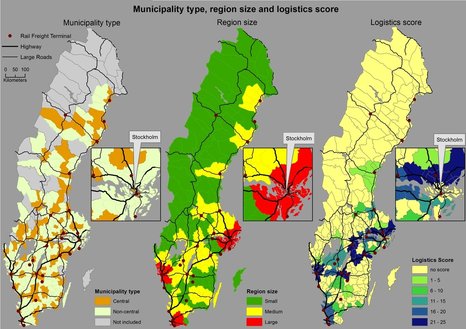 ​How did I do it?
I compared all individuals over the age 25 in Sweden that went from wage-employment in 2010 to starting a wholesale business in 2011 to all individuals that remained wage-employed, using a logit regression framework. Both individual characteristics and location characteristics were controlled for. Individuals in peripheral municipalities were separated from the ones in central municipalities. What was special about the municipalities that had relatively more wholesale start-ups? Were peripheral municipalities with better transportation services able to attract relatively more wholesale start-ups?
Main methodological problems dealt with (very technical info):
Spatial sorting (by excluding people that have moved into the municipality) and spatial autocorrelation (through inclusion of spatially lagged variables).
​Main finding
The provision of transport infrastructure, in terms of proximity to highways, overall logistical convenience, and access to market demand, is particularly important for wholesale start-ups in peripheral locations. Wholesale entrepreneurs prefer to stay outside of central and denser municipalities but prioritize locations with good connections to these places. The development and promotion of logistics and the transport infrastructure can be a viable regional development policy for smaller peripheral municipalities that results in encouraging investments in wholesale firms and hence knowledge transfer between locations.
Paper 3:
​“Labor Market Accessibility and Unemployment”
-coauthered with Maria Börjesson (KTH, Sweden) and Christer Anderstig (WSP, Sweden)
Status: "Published in Journal of Transportation and Economic Analysis"
Research funded by: Center for Transport Studies, Transport Analysis and ﻿Jönköping International Business School﻿
​What is it about in one sentence?
The effect of an improvement in the transport system on the unemployment rate in regions in Sweden.
​Who cares and why?
Mainly urban and regional planners/developers should care. Anytime an investment in the transport system is proposed, a cost-benefit analysis is used to justify the investment. These cost-benefit analyses do traditionally not consider the wider economic benefits of transport infrastructure such as possible improved employment rates in regions. The rationale being that an improved transport system expands the area that people will look for jobs and hence increases the number of jobs available –search costs are reduced and job-worker matching improved.
​Main finding
We found that improvements in labor market accessibility due to changes in the transport system have a negative impact on unemployment, with an elasticity of approximately 0.01, in both small and large labor markets. We found a higher elasticity for workers with low education.
Paper 4:
“Market potential and the employment growth of knowledge intensive services: comparing different geographical resolutions”
-coauthered with Johan Klaesson (Jönköping University, Sweden)
Status: "Published in Annals of Regional Science"
Research funded by: ﻿The Swedish Board of Agriculture﻿ ﻿and Jönköping International Business School﻿
What is it about in one (long) sentence?
​An investigation of the role that the geographical resolution plays in empirical research regarding the relationship between the spatial distribution and growth of regional innovativeness (proxied by high-tech knowledge-intensive services) and accessibility to economic activity (market potential).
​Who cares and why?
-What is the correct spatial unit of analysis? If the results are different depending on the unit of analysis, researchers should be aware of this and make sure that they use the proper unit for their purposes (if the data allows it).
-Regional innovativeness is vital for economic growth and improved living standards. Regional planners want to know how to boost regional innovativeness.
​How did we do it?
-We used panel data on all firms in Sweden between 2002 and 2010 and divided them into different groups of service- and manufacturing industries. The main goal was to explain what drives the growth of high-tech KIS (Knowledge Intensive Services) as a proxy for regional innovativeness in areas; and in particular, how important accessibility to economic activity is for its growth. The other industries were used as comparisons: general KIS, less KIS, high-tech manufacturing and low-tech manufacturing.
-We performed the analysis on two different spatial units of analysis: municipalities (conventional unit and very common in previous literature) and SAMS - Small Areas for Market Statistics (these are basically neighborhoods and not conventionally used in previous research, mainly due to lack of data availability on this level).
-We calculated four different variables measuring accessibility to economic activity (discounted by travel time) on the SAMS level: accessibility within the own SAMS region, accessibility within the own municipality, but outside of the own SAMS region, accessibility within the own labor market region, but outside of the own municipality, and accessibility within the county, but outside of the own labor market region.
​Main finding
Accessibility to economic activity is particularly important for the growth of high-tech KIS industries and that this pattern can be detected at a detailed geographical scale since knowledge dissipates quickly with distance. Therefore, it is especially important to analyze the growth of the more advanced sectors of the economy on a spatially granular level.
Powered by